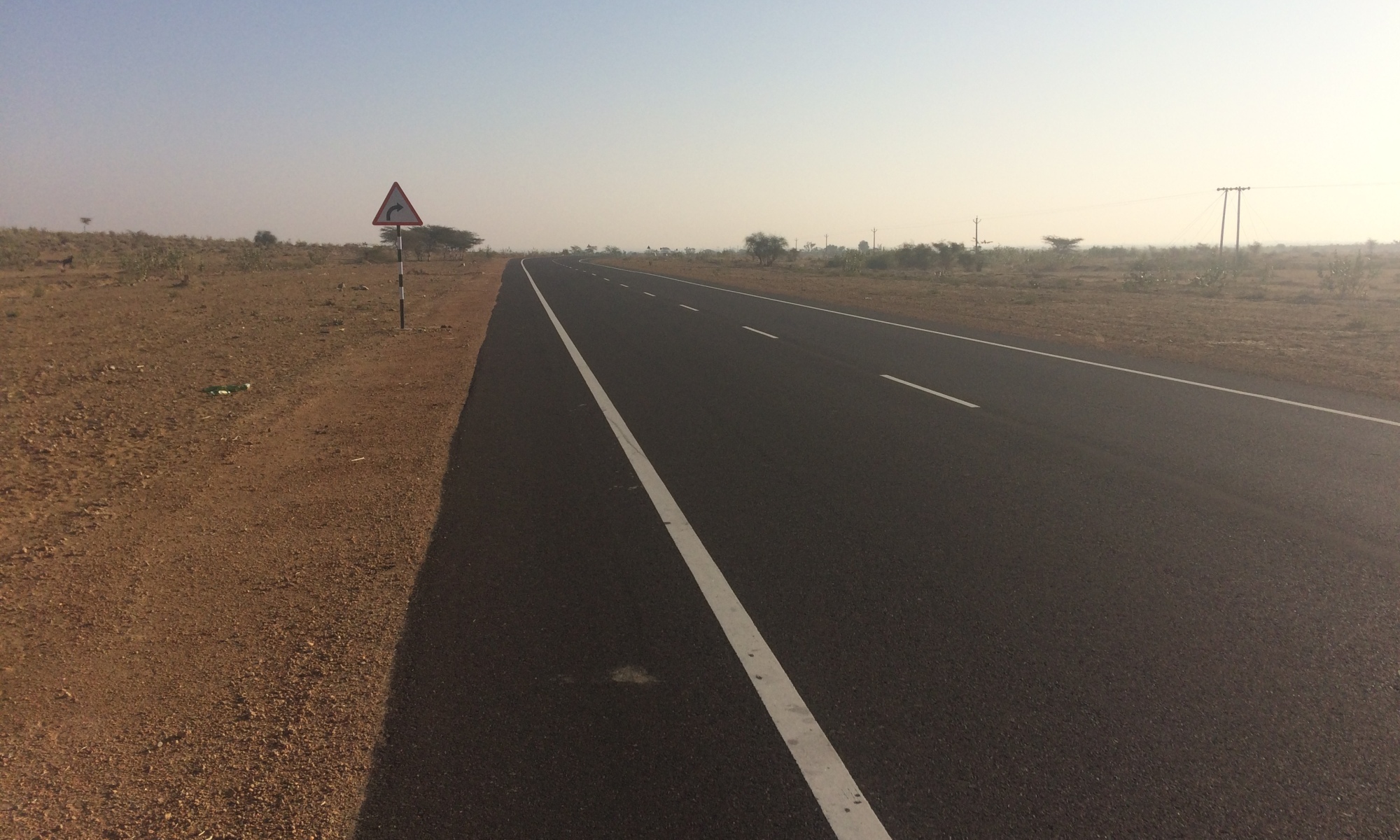 Imagine huge 5-10 tonne beasts roaring loudly, racing past each other on an asphalt tarmac. The ground trembles under the combined assault of this gigantic pack, racing at speeds reaching 80-120 kmph.*; the beast overtaking the others nearly breaks out of the tarmac and leaves behind a plume of dust and debris. Thankfully, there are no collisions and the winner rushes ahead oblivious of the tremors that it created. The dinosaur pack vanishes into the distance; and out of the swirling dust and debris emerge tiny beings choking in the wake, bewildered and disoriented.

Sounds like a Hollywood thriller featuring gigantic beasts battling to control the world ? Err .. No. Welcome to the real life Indian highway traffic. This is almost a daily routine here. At risk are the inconsequential cyclists, the tiny beings, like me, who have to keep a constant watch in the rear view mirror and be ready to dive out of the road. The thought of being plastered on the front view of these speeding beasts keeps gnawing in the mind of those like me. There are no rules on our national highways linking states and cities. The unwritten code here is : The bigger and noisier the beast, the more it deserves to be respected, traffic rules be damned !

If you haven’t guessed it, the dino* beasts are buses, trucks, lorries and dumpers; at the head of the traffic food chain, then the middle sized SUV’s**, mini-trucks and pickups with the cars and then the motor bikes completing the hierarchy. Our highway traffic follows it’s own rules based on the hierarchy above. Cyclists like me are the lowest vermin with no rights on the highways. Since there is almost no traffic rule enforcement, I won’t even discuss the highway patrols here, and focus on the unwritten lawless highway traffic code.

Let’s get down to business and start with the pirate code; for starters your vehicle size matters. The bigger the beast you ride, by big I would say it’s both weight and size, the more you can flex your might on the highway. At the top of the food chain would be the beast trucks hauling several tonnes of load and often overweight. They are to be feared as they can just about do anything, including crush you like a mosquito. In the nights these beasts become true predators, with their liquor soaked drivers driving them into a speeding frenzy. Their presence can be heard from a distance, with crude music blaring from their driving cabins and the roar of their engines. To be fair most of the trucking drivers here are underpaid and overworked, and they do have an obstinate, dangerous streak about them as they drive these monsters. If you want to survive, keep your distance from this top predator.

The middle tier of the food chain is populated by swanky SUV’s, pickups and mini-trucks. The SUV’s are the things to be watched out for. The new ones have a fast acceleration and can zip up to 120-150 kmph. without breaking a sweat. The drivers of these beasts are often not concerned with the world outside, locked up in their own air-conditioned cocoon often with stereos belting out desi aka vernacular music. To add to this it’s common for the SUV drivers to talk on mobiles and have a hearty chat with the other occupants, while zipping on these things. This leads to predictable results. For a lowly cyclist like me, SUV’s are a terror. They can weigh a tonne and have a sizeable girth. One kiss from this baby and I could end up with Saint Peter. Which leads me to the other beasts in the middle tier.

The pickups, mini trucks and vans make up a dicey mix. They are often loaded up to the brim with stuff intended for local markets. Like vegetables, bread, milk and maybe sacks of flour. The main thing to remember is that they are in a tearing hurry to get that load to the market. Add that to the reckless driving culture with the load that they are carrying, and the picture is complete. The early morning ones are the worst. If that does not horrify one, let’s add more spice to the mix, most of these vehicles are not road worthy. I saw one whose chassis was inclined at such an angle that the vehicle looked like it was travelling sideways. It’s best to bail out of the bicycle if this beast heads for us and needs to brake to a halt. Braking is a no go with these vehicles, with the speed and the load that they are carrying. By the time they will halt it would be game over for the cyclist.

This brings us to the cars and the mobikes*. These are the fastest ones on the highways, zipping in and out, weaving to and fro between the dinosaurs. A Formula One driver would be put to shame at the manoeuvring undertaken by the warriors behind the steering wheels on Indian roads. Again, when the split second calculations fail, it’s a sad end. Cars treat dino trucks as slow trolls, weaving between them and zipping away. For the cyclist, this means keeping a watchful eye as there is no lane discipline when cars try to overtake a heavy. If they hug the outer lane where we travel, it’s best to drop off the road.

Mobikes are the fastest, with the latest ones running faster than most cars. They pose the least danger as they have to be careful too, being just a rung above the cyclist. Most mobike riders will often slow down for a friendly ‘on the road drive-as-we-chat’, which I have found to be a bit disconcerting as well as comical. Cyclists have to maintain a lateral as well as vertical balance without any motor power and chatting while cycling is tough. Then there is the traffic following on behind us that keeps blaring their horns to break this impromptu conference on the road. In some cases, I had to stop at the roadside if the conference continued for too long, just to let the traffic behind pass through. Fun facts apart mobike riders will get nasty if a cyclist is stuck in a traffic jam, cause the hierarchy kicks in when it’s jam time. The mobikes get priority while the cyclist has to wait for the jam to clear.

Moving on to the other rules in the lawless code; there is no such thing as a cycling lane. Cyclists travel on the outer fringes of the road, inside clearly marked side lanes on highways. But as lowly vermin we have no ‘actual’ lanes, speeding beasts will often hog the whole road while overtaking and cyclists have to take the dirt track next to the road, when that happens. Then there is the unique Indian highway traffic phenomenon of a wrong side reverse traffic flow on the ‘supposed’ cycling lanes. Mobikes, jeeps, auto rickshaws and passenger loaded tempos will often travel on the wrong side using the cycling lane with their headlights on as a sort of warning to the incoming cyclist. If we do not heed the horns and the headlights, it’s game over as they travel on the wrong side at high speeds. This mostly happens near small town settlements but is in no way restricted to such, and one has to be always on the alert.

Once all this sinks in, we are ready to tackle the highways. Helmets are very conspicuous here as most Indians think they have a head made of unbreakable titanium alloy. A cyclist with a helmet is considered as rare as a Martian, since even mobike riders on highways here don’t use one. It’s advisable to wear one though. The post is not meant to discourage prospective cyclists. Many of us out there are actually doing it despite the insurmountable odds. Drive slow, drive safe and be alert.

Will keep adding more to this post, so do check back and try to take up your cycling, you won’t regret it !!