Before getting into this controversial issue I would like to emphasise that I am not against evangelism, but it should be within the bounds of decency. A lot of Indians like me have seen evangelism of the brash American/Western sort being pushed in our faces here. This makes us uncomfortable.

For the sake of brevity, it should be plain and clear to people when others say ‘NO’ once. However, people of some faiths seldom stop at that and continue to push their agendas even going to the the extent of threatening violence and intimidation.

The recent case of an American missionary being tragically killed on an isolated island in the Andaman Island chain is the trigger for this topic. Refer Google for this, it’s a few days old. The Andaman islands have seen plenty of evangelism of the ‘forced’ kind under British rule and then voluntarily under democratic Indian administration too. The Government here has made it pretty clear that the North Sentinel Islands* in the Andamans are off limits and this is because of good reason i.e. the isolated tribe there has refused outside human contact. They have also previously attacked and killed people who tried to get friendly with them. However this loud and resonating ‘NO’ probably hits a wall with some people.

The media here has wrongly portrayed this as laxity on the part of Indian authorities. Authorities can do little when people try to sneak up to the islands behind their backs. The isolated tribe is at great risk when they do come into contact with outsiders who can carry germs and infections against which the Sentinelese do not have any immunity. But, that again doesn’t reach up to the heads of some folks.

By the way, we are trying to preserve this microcosm of a prehistoric culture; by some calculations as old as 60,000 years, on the Sentinel islands. So it would be deeply appreciated if people stop being saviours and just be human instead. Also the rest of the Andaman islands are worth visiting and there are some good scuba diving spots there. I completed my SSI Open Water Scuba Diving certification from DiveIndia, Havelock island, so I can vouch for the pristine beauty of the Andamans and the excellent dive spots there. 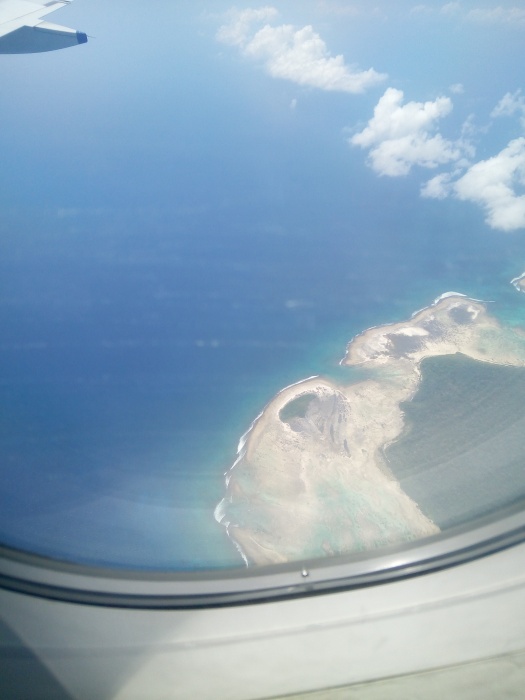 Andaman islands from the air, on the way to Port Blair, Veer Savarkar airport. Port Blair is the administrative capital of Andaman Islands.