Orchha* is a historical town locked in medieval time. It’s a goldmine for those interested in history and adventure. It was on my radar for long but somehow the journey never came to be. It was time to settle this.

The jouney to Orchha took me two days on my modified roadie, with a night halt in between. The return leg was similar. Stoppage in Orchha was for a day. The total distance covered was approximately 500 kilometers. Orchha is in the state of Madhya Pradesh, so as far as I am concerned it was an interstate trip, my state being Uttar Pradesh.

Road traffic along the whole route is heavy, except for the last 20 kilometere leg to Orchha town. The route is quite good for a roadie run except for a very rough patch in and through a town called Kalpi. Kalpi is a dusty town and the road here has craters that can break a heavy vehicle’s axle. The entry/exit to Kalpi is via narrow bridges on the river Betwa and this causes frequent traffic jams. Had to dismount on the return leg and walk through the town.

My roadie all laden up with gear, 100 km. from Orchha.

Lodging and food on the journey to Orchha was in roadside dhabas ( trucker stop restraunts ). Most of these are situated far away from congested towns and are very convenient for cyclists. As for me dhabas always were a major attraction as the fresh clean air of the countryside never failed to rejuvenate me.

A typical roadside dhaba, the food is tasty and reasonably priced, about 100 km. from Orchha.

Near Orchha the terrain becomes hilly with a few uphill/downhill gradients. The town is surrounded by forests although most of these are now rapidly being encroached by human settlements.

The town itself is full of historical relics and one gets a sense of being locked in time here. The culture here hasn’t changed much over the centuries.

Orchha gate, the entry to the town.

The town gate was probably part of a historical fortified structure built to guard it. In Orchha there are historical ruins and structures dating from 16th to 19th century A.D., with the Orchha fort being the major historical attraction. Besides the fort, there is the cenotaph complex next to the river Betwa and the Ram Raja temple.

The town itself is small and all the historical monuments are situated within walking distance. The lodges and hotels are budget oriented. The Ram Raja temple has a plethora of sweet shops and restraunts. Mouth watering peda** and kalakand adorn the sweet shops next to the temple. 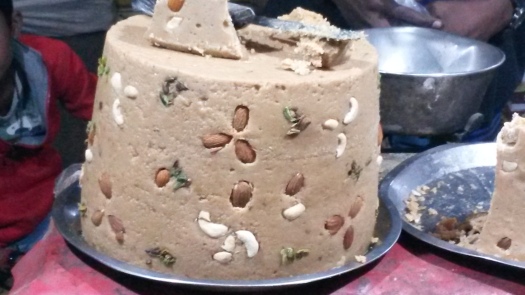 My stay was in a budget hotel, next to the temple landmark of Orchha. The rooms were spacious and clean with hot piped water, which was a welcome relief from bathing with cold water in my dhaba lodgings. Winter temperatures can reach around 2-5 degree Celsius here but it gets hot in the afternoon. 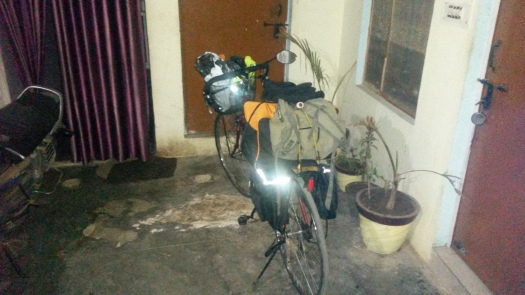 The roadie parked next to my room at a lodge in Orchha.

The return leg from Orchha started around 6:30 am, and I was heavily decked up to face the morning winter chill. 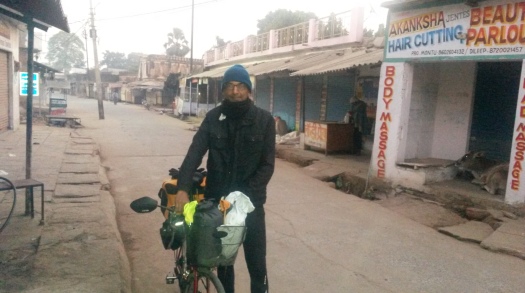 Yours truly getting ready to start off the return leg.

There was a gear malfunction on the return leg with low tire pressure issues along the way. But this was sorted out as I was carrying a full bike repair kit alongwith replacements.

The route from Kanpur to Orchha and back, has quite a few long arching highway flyovers but there are level byways alongside these. These byways are something of a boon for cyclists like me as huffing and puffing up the flyover inclines alogside speeding heavy truck traffic is not something to be relished. Further, most of these byways are almost empty of any traffic which is something a cyclist would enjoy. However, not all of these byways connect right up to the bridge end, with a few coming to an abrupt end halfway across the flyovers. One has to be careful in making the byway route selection.

Byway alongside a highway bridge.

That is it for the very enjoyable bike trip to Orchha. If you would want to see more about Orchha and it’s historical structures, do visit my other blog specifically for videos and pics on these.

2 Replies to “Journey to Orchha”